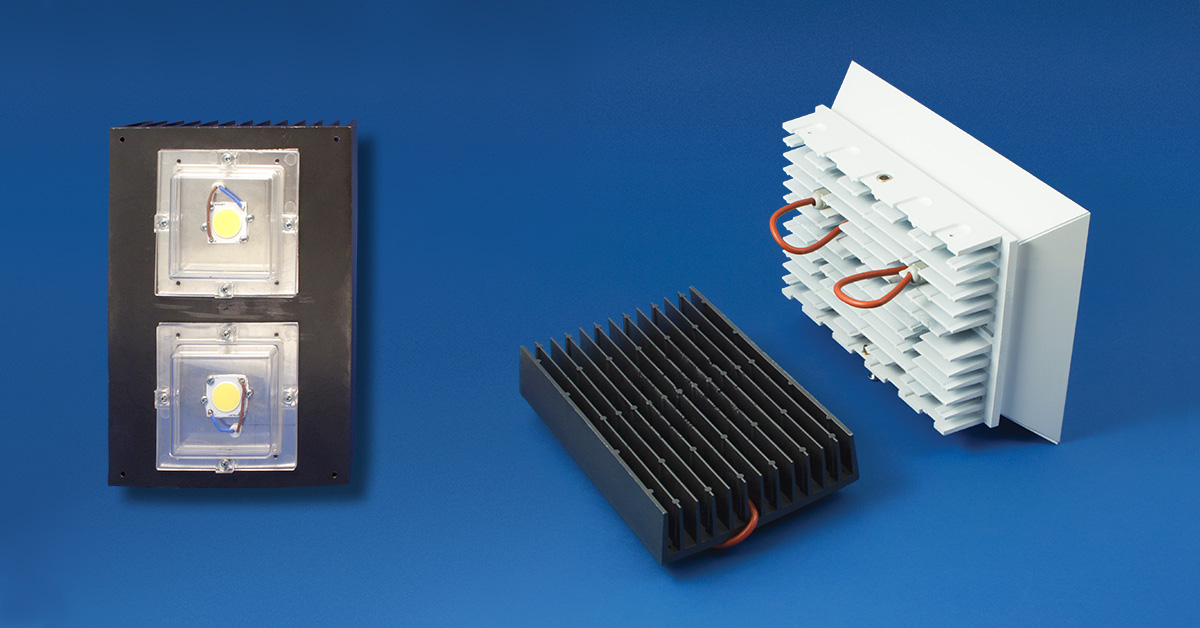 The rapid evolution of LED lighting systems has led to the development of increasingly powerful and efficient devices, suitable for replacing conventional sources even in the most challenging applications, such as, e.g., lights for public and industrial use. The main players of this sector are the COB LEDs (Chip On Board) LEDs in which numerous light diodes are joined together and mounted on the substrate to form a single large source. The advantages of the COB LED solutions are many, such as the reduction of necessary components for the lowest number of welded joints, the absence of lenses, and the higher light density. It is clear that the management of the heat generated by such a structured system is of vital importance for the duration of the product. The use of aluminum heat sinks is a solution considered to be mandatory even at maximum junction temperatures close to 150° C.

Electromagnetica, a company based in Romania and a leader in the production of electrical and electronic equipment, has decided to buck the trend focusing on thermally conductive plastic compounds to develop a new industrial projector built with COB LED light sources.

This challenge required a robust scientific approach, based on numerous rigorous simulations and experiments aimed especially at evaluating the cooling as well as the quality of the emitted light.
The result is the CASTOR 2M light, an industrial projector that houses two COB modules for a total power close to 70 W. The unit must be reliable up to an ambient temperature of 45° C and under natural convection, i.e. without forced air. Despite the high electrical efficiency, the system generates a large amount of heat to be dispersed.
Is it possible to use a technopolymer heat sink with such a scenario? The answer is affirmative, provided that the geometry of the radiating elements and the interface between the PCB substrate and the thermoplastic compound are correctly configured.

The material chosen by Electromagnetica is LATICONTHER 62 GR/70, a product that LATI has developed to disperse 70% of selected graphite in the PA6 polymer matrix. The thermal performance of this compound has been carefully measured. The average thermal conductivity was close to the effective 10 W/mK even at high ambient temperatures and regardless of the orientation of the graphitic flakes. These values are well above the benchmarks of other LATI and competitor compounds.

The correct design of the heat sink has proved to be fundamental due to the large amount of heat to be disposed of and the thermal limits of the thermoplastic matrix. So the thickness of the heat sink base as well as the shape and spacing of the fins have been optimized.
The meticulous study of the thermal phenomena at the base of the cooling efficiency is also fundamental, to which the radiation contributes in a similar way to the convection.

Thermal conductivity of alloys normally used to manufacture heat sinks is close to 150 W/mK, thus far from the 237 W/mK of pure aluminum. This difference helps to reduce distance between metals and LATICONTHER. Higher heat capacity of plastics provides another valuable advantage, that is reduction of thermal load to be transferred thanks to increased heat storage capabilities of the sink itself.
Advantages provided by LATICONTHER include extremely low moulding shrinkage and related excellent dimensional stability, required for flawless assembling, and reduced weight thanks to its density, close to one half that of aluminum.

The light is able to provide a minimum luminous flux of 8000 lm without the junction exceeding 80° C. The excellent appearance of the product is also ensured by the quality of the surface finish of the heat sink in LATICONTHER and by the cataphoresis coating directly carried out on the technopolymer. The IP65 classification completes the technical framework of the CASTOR 2M.